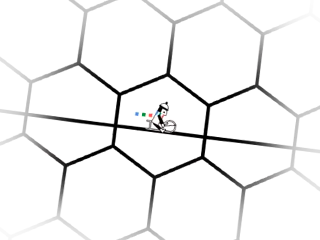 This amazing video was commissioned to Ben Harvey (a.k.a. Rabid Squirrel) by Super Flu to create their official music video for their single, Selee. The video contains no post-production. The three sections of pulsating background visuals (hexagons, triangles, rhombuses) were generated by David Lu (a.ka. Conundrumer) with custom build code and math. The storyboarding was done in collaboration with Sharon Pak and they only had few months to get it all done!

I’m sure you’re wondering how it was created. The answer. Line Rider!

If you’re unfamiliar, Line Rider is something of a primitive physics game. It’s also a toy, a vector graphics editor, an animation tool, and well, basically, an all in one application. Simply put, the player draws lines for Bosh’s sled to go down bring your doodles to life.

Developed in 2006 as a Flash game by Bostjan Cadez it soon grew in popularity in 2007 among public school computer labs. It grew so quickly that even McDonalds got in on it, creating a series of commercials within the game.

The Line Rider build used here is a reboot Conundrumer created using modern web technologies. Due to licensing restrictions, as Line Rider is a trademark of inXile Entertainment, Inc. you can find Conundrumer’s open-source physics engine over at Github.

You can also check out and play with the track in edit mode here at linerider.com.

There are is a platform for us all. Go out and find your muse! :)