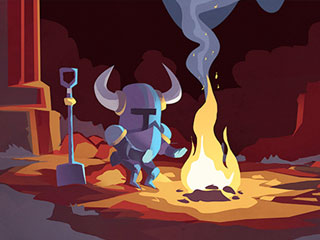 Some games are all about nostalgia. They remind us of the good old days, the days before microtransactions and military shooters and massive updates. Maybe we should thank or blame, depending on your experience, Kickstarter, the crowdfunding platform where we give designers millions of dollars not to make new games but to make distinctly old ones, games like Bloodstained and Ukelele and Thimbleweed Park. I hope all of those developers have played this game, Shovel Knight. It was also a Kickstarter project generating some three hundred thousand dollars for its developer and perhaps more than any other game successfully tapped into this sentimentality for the past. I’m Mark Brown, this is Game Maker’s Toolkit, and here’s how Shovel Knight did it.

With his blue armor plating and the way he battles similarly shaped boss characters all with similar names, Shovel Knight is definitely reminiscent of Mega Man, but he doesn’t shoot lemons out of his arm. Instead, he’s got a short shovel swipe that brings back memories of Ninja Gaiden’s stubby sword. His downward plunge is reminiscent of DuckTales. Shovel Knight’s special moves are cribbed from Castlevania, most notably the throwing anchor that works exactly like Simon Belmont’s iconic ax. Levels are picked from a map, like in Super Mario Brothers 3, complete with these enemy encounters, and the towns, where you level up and talk to other characters, look like the ones in Zelda 2.

Instead of trying to copy a specific game from yesteryear, Shovel Knight borrows liberally from the entire NES catalog to make a game that reminiscent of 8-bit games in general. That’s smart, because when you’re trying to evoke the memories of one game or one series, you’re not only trying to compete with the actual game, but also people’s nostalgic memories of that game. That’s something else entirely. Old games look better, sound better, and feel better in our heads. We misremember the size of the worlds and the lengths of the quests. Our memory is rose-tinted. We remember the epic moments, but we forget about the grinding. We remember the thrill of beating a tricky level, but block out the one-hit kills that had us breaking controllers.

“Instead of trying to copy a specific game from yesteryear, Shovel Knight borrows liberally from the entire NES catalog to make a game that reminiscent of 8-bit games in general.”

Shovel Knight dodges most of that, because it isn’t tied to the expectations and baggage of a specific game, but it does have to contend with our cognitive bias of what retro games in general were like to play. To do this, it first takes everything that make those games so good: the strict focus on a single mechanic and imaginative level design that conjures up dozens of ways to explore that idea, the precision and consistency that comes from chunky characters and grid-like levels, the secrets and the bosses, the way these games taught you stuff through level design instead of tutorials, and the way they let you start playing in a matter of seconds.

But, it’s not afraid to throw away the stuff that sucked about those games. Most notably, the punitive death systems that were a hold over from arcade game design and a way to stop you finishing these games in an afternoon. You won’t find yourself running out of lives, or witnessing too many cheap hits, or re-spawning enemies. The game might knock you back when you get hit, which is what sent you to your death over and over again in Castlevania, but Shovel Knight quickly gives you air control to get back to safety. Oh, and you also don’t have to blow on a cartridge to stop the game from glitching out.

When fixing those issues from the past, Yacht Club borrows from modern games when it makes sense. The game’s got a system where you lose your money when you die, and you have to make your way back to where you failed to reclaim your loot, a system ripped straight out of Dark Tales. It makes sense. It gives your deaths meaning and introduces a layer of tension, without forcing you to replay entire levels or start from scratch. The checkpoints also let you pick your own difficulty which is a more modern way of thinking about challenge. If you break a checkpoint, you will get a big load of loot, but you won’t come back to that area when you die. A clever risk versus reward setup and proof that Shovel Knight isn’t just ripping off other games, but coming up with ideas of its own.

Here’s the one that’s going to get me in trouble with the commenters, but Shovel Knight is also more progressive than most NES games. Many 8-bit adventures were about saving your girlfriend or your sister or a princess from capture, and while Yacht Club does reference this, it flips it on its head by making Shield Knight strong and capable.

In essence, Shovel Knight is tricking you. It makes you think you’re playing an NES game without you fully realizing that you’re actually playing one without the limitations of that console. Nowhere is that more true than in the presentation of the game, because, hey, no NES game looked like this. The most obvious change is the switch to widescreen to fit modern TVs and hand-helds. It also has full parallax scrolling which is where the foreground and background layers move at different speeds to suggest depth. The NES only had one layer, so games like Shatterhand, Return of the Joker, and Sword Master used animated tiles and backgrounds with distinct horizontal lines to fake the effect.

Shovel Knight totally cheats by using multiple layers, like on a Super Nintendo. The game can also render loads of sprites on one horizontal line without flickering, there are more particles on screen than the NES could handle, the game’s got a higher color palette, and there are more colors per sprite and more palettes simultaneously on screen than were allowed by the hardware. The music is more faithful, but perhaps not to western ears. It mimics Konami’s powerful Famicom only via C6 sound chip gave the Japanese version of Dracula’s Curse three more sound channels to play with. Here’s how that compares to the US release.

Plus, Shovel Knight ignores the limitation that score sound effects cut through the music on the NES, as sounds and music had to share the same channels. This game cheats and plays both simultaneously. To most people, they won’t even notice these tricks. It looks and sounds faithful to the NES, because this is what retro games feel like in our memory. When you play a game like Mighty Gunvolt which is more slavishly faithful to the 8-bit aesthetic, looks a bit too plain.

Shovel Knight presents us with four principles for successful nostalgic design. It borrows from multiple sources. It takes the best bits of its source material, and isn’t afraid to modernize what didn’t work, and it presents the games with a familiar retro aesthetic, but with a rose-tinted filter. We can use this to see why other nostalgic releases did or did not work. Hyper Light Drifter borrows not just from a link the past but also Mega Man Zero, Miyazaki movies, and Diablo. It’s challenging and oblique like a good retro game, but has smooth analog controls and liberal checkpoints. While it has 16-bit pixel art, it has a unique color palette and more things on screen that any Super NES game would dare show.

Mighty Number 9, on the other hand, is just trying to be Mega Man. It takes everything from those games, not just the frantic boss battles and themed levels, but the frustrating deaths and limited lives. Its visual style is just, what is this? This isn’t anything. It was supposed to remind us of the best bits of Capcom’s Forgotten Hero, but ended up reminding us of all its worst traits, even the awful, awful, voice acting.

There is, of course, more to Shovel Knight than nostalgia. It’s built by ex-Way Forward developers who have years experience making 2D platformers. The level design is top-notch, and it’s charming and funny, without relying on memes or groan-worthy references. But above all, it’s a fantastic example of nostalgia done right.