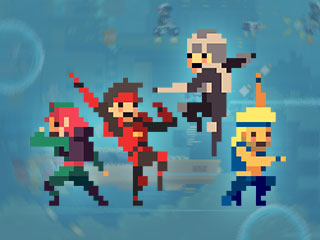 The Secrets of Game Feel and Juice

The Secrets of Game Feel and Juice

This is an iPhone game called Random Heroes. It’s a run and gun platformer and it’s fine. It exists, but it feels kind of limp and lifeless, like the video game equivalent of a cabbage. It doesn’t even really look much fun, right. Now compare it to a game like Super Time Force, and it’s a completely different experience. It feels alive and responsive. It pops and crackles like electricity is surging through your Xbox. It’s just much more fun.

I think this is a good example of how of how one developer, Cappy in this instance, has maximized an elusive quantity in games that some call game feel. This is a mostly abstract, largely invisible art, but getting it right is essential when making a great action or platforming game. It’s something that players can immediately detect as soon as they start waggling analog sticks and jabbing at buttons. It mostly occurs in the fundamental action of the game. It governs the second to second play, and it’s felt in the very undercurrent of the game. A good way to test for this is to think “How does the game feel even when you strip out the points, the story, the graphics, the music, and the clever level design? Even without all those trappings, is your game still fun to interact with?”

“How does the game feel even when you strip out the points, the story, the graphics, the music, and the clever level design? Even without all those trappings, is your game still fun to interact with?”

The Super Mario games are. In Mario 64 the plumber is such a fun avatar to control with his bouncy jump, his wall kicks, his triple leaps, his long jumps, and his stomach dives, that you could lose hours just hopping around a blank room, and it’s said that for the first few months, that’s exactly what Mario 64 was like as Shigeru Miyamoto fine tuned every aspect of Mario’s movement before making anything else. The game feel here is about the friction and momentum and weight of Mario, and it’s the most important thing. In fact, the level design and enemies in Mario 64 exist simply to facilitate Mario. The levels let players express his movement, and challenge them to master his underlying move set.

Other developers have clocked this. Super Meat Boy, for example, feels fun a primal kinetic level, but plenty of platformers are hampered by loose controls and stodgy movement. Likewise, the best actions games would still be fun, even if your just blasting enemies in a blank room forever, but many others lack that vital energy. When it comes to the fundamentals there’s not j=much I can do to help right here. It’s going to be completely different for every type of game, and I’m sure that “Be Shigeru Miyamoto” is particularly helpful advice, but there are lots of little trick often used in the polishing stages that you can crib from great games to make yours feel a hundred times better. In the spirit of brazen theft, I stole most of these from talks by Vlambeer, Cactus, and Grapefrukt. I’ve linked to the full talks in the description below if you want more.

First up is Screen Shake, and Vlambeer is the king of this stuff. All it’s game wobble uncontrollably when you fire a gun or hit an enemy or saw through a fish. It feels satisfying and provides instantaneous feedback that the player is touching the world. Vlambeer also likes to pause the game for a split second when you hit or kill an enemy just to make those impacts more impactful. You see this in fighting games too. Watch how the action judders in Street Fighter to really make those kicks hit home. God of War does this also, and most Zelda games do it as well. To be honest, anything you can add to make it really clear that you’re damaging an enemy is worth it. I’m talking about making them flash white, get knocked back, spray blood, change animation, or make a satisfying sound. It all provides useful feedback and it improves the games feel.

Similar effects can make pliable characters feel like they’re really part of the world like tiny dust particles when you hit the ground and recoil when you fire a gun. Sound effects are key. Make them basey and loud. A gun shouldn’t sound like this, it should sound like this. You can use randomized sound effects to avoid repetition or steal the rising pitch idea from Mario and Peggle to sell the tenuous joy of nursing a combo.

Next, be creative with your camera. In Luftrausers, the camera doesn’t follow your plane, it intelligently moves to frame the action and reveal nearby threats. In Hotline Miami, the camera juts out far in front of where you are looking to help you know how your hero is orientated. Make stuff big, really big. Make the bullets as big as your face like a in Nuclear Throne. Maybe the explosions mini-atom bombs like in Super Time Force, and make the blood splatters into geysers of red goop like in Hotline Miami. Hotline Miami has a permanence that many other games lack. Bodies and blood sprays stick around when you walk back to your car to give you a little short term nostalgia of the chaos you’ve caused, and to make the battles feel really hard won.

Ultimately, this stuff, which some call juice, is all about doubling down on whatever your game is about. If it’s about shooting then make the guns kick and make the fire rate fast and have the camera shutter with each shot, but if it’s about jumping, give your character friction and keep the camera still so you can land each jump. Game feel is something that developers can spend months, if not years, working on, so I doubt you’re going to find the secret to making your game fell fun and satisfying in a 5 minute YouTube video, but hopefully there’s something to take away here about making the fundamental action feel good, and making every lick of polish speak to what the game is really about. Follow that advice and maybe, just maybe, I won’t have to play so many limp and lifeless iOS games for my job.