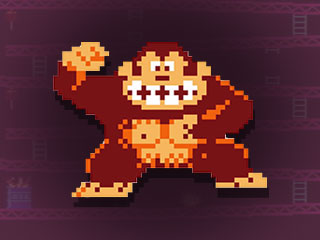 This is Shigeru Miyamoto. If you’ve played video games any time in the past 30 years, you’re probably familiar with his work, Donkey Kong, Zelda, Star Fox, and then, of course, this guy. When Miyamoto makes games, he always tries to do things differently than other designers. Here he is back in 1998 explaining why he wasn’t focused on online gaming.
Shigeru: It’s a trend. And I try to avoid all trends.
And why he wasn’t adding small in-game purchases to Mario for iPhone in 2016.
Shigeru: Everyone was saying I had to do it, but I’m the kind of person that doesn’t want to be told to do something because “that’s the way you do it.”
Miyamoto has helped define a lot of what makes a video game great. How does he do it?
Shigeru: I think that first is that a game needs a sense of accomplishment. And you have to have a sense that you have done something so that you get that sense of satisfaction of completing something.
In 1981, one of Miyamoto’s first assignments at Nintendo was to design a replacement for a game called Radar Scope. It had performed really poorly in the US, leaving the company with 2,000 unsold arcade units. This is what he came up with. Miyamoto based the story on the love triangle in Popeye, between a bad guy, a hero, and a damsel in distress, but since Nintendo couldn’t secure the rights to use those characters, Miyamoto replaced them with a gorilla, a carpenter, and his girlfriend. In later games, that carpenter became a plumber, and his name changed from Mr. Video to Jumpman and then to Mario after this guy, the landlord of a Nintendo warehouse near Seattle. This is one of the first times that a video game’s plot and characters were designed before the programming.
Shigeru: Well early on, the people who made video games, they were technologists, they were programmers, they were hardware designers. But I wasn’t. I was a designer, I studied industrial design, I was an artist, I drew pictures. And so I think that it was in my generation that people who made video games really became designers rather than technologists.
That change and approach came at a key time for video games. When Donkey Kong was first released in 1981, the video game market in North America was on the verge of collapse. It was saturated with a lot of different consoles, and the boom in home computers made a lot of people question why they would want a separate device just to play games. The storytelling in games like Super Mario Bros. and The Legend of Zelda, which you could only play on Nintendos on hardware helped set them apart as bestsellers.

Shigeru: When I approach the design of my games, what I have to think about is how I’m showing a situation to a player, conveying to them what they’re supposed to do. In Mario you keep moving to the right to reach the end goal. In Donkey Kong you keep climbing up to rescue the captured princess.
A lot of Miyamoto’s genius can be seen in the first level of Super Mario Bros. This is probably the most iconic level in video game history. It’s designed to naturally teach you the game mechanics while you play. If you look at a breakdown, there’s a lot of really subtle design work going on here. Though Mario is usually at the center of the screen, in this first scene, he starts at the far left. All the empty space to the right of him gives you a sense of where to go. Now this character’s look and movement suggests it’s harmful, but don’t worry. If you run into it, you’ll just start the game over without much of a penalty.

Next you see gold blocks with question marks. These are meant to look intriguing. Once you hit one, you’re rewarded. That then encourages you to hit the second block, which releases a mushroom. Even if you’re scared now of what this might be, the positioning of the first obstacle makes it just about guaranteed that you’re going to run into this thing. Once you do, Mario gets bigger and stronger. Just like that, you’ve learned all the basic rules of the game without having to read a single word.
Shigeru: What else is there? The last is the immersive quality of the game, being able to feel like it’s a game you’re immersed in, that you’ve become a hero. That you’ve become brave. Even if you’re actually crying.

Immersiveness in a video game has a lot to do with the controls. The more precisely you can move your character, the more you feel like you’re part of the story. Nintendo has always been a pioneer with controllers. It was the first to have the classic setup of the directional pad on the left and the buttons on the right, the first to have left and right shoulder buttons, the first to have a 360 degree thumb stick, and the first to bring motion control to the mass market. With 2016’s Super Mario Run, Nintendo for the first time made a game for a controller it didn’t design, the iPhone.
Shigeru: Over time, not as many people have been playing Mario games. And we ask ourselves: Why have people stopped playing Mario? And for people who played early on and then stopped playing, oftentimes it’s because the controls got too difficult.
The Wii U flopped when it came out in 2012, and Nintendo 3DS sales are far below those of its predecessor, but the number of American gamers playing on mobile phones has doubled to more than a 164 million between 2011 and 2015. You can kind of think of Super Mario Run as a shift from immersiveness to accessibility.
Shigeru: I think the end result is a game anyone can play, from first-time players to the most experienced ones.
That’s kind of been Miyamoto’s design philosophy from the very start. Make fun games that everybody can play. The rest is in our hands.
These controls direct the characters. The better your eye-hand coordination, the better you do.