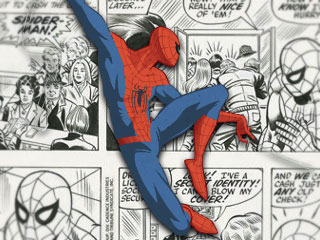 Everybody knows the story of Spiderman. Nerdy orphan from Queens, radioactive spider, superpowers. But, here’s the question most of us overlook. Why is it that when Peter Parker, a scrawny nerd becomes Spiderman, a buff superhero, he fights like this? In the case of the new game from Insomniac, Spiderman’s fighting style appears to be a hybrid of three influences.

The first influence gives us acrobatic dodges like this, and dramatic strikes like this. These techniques are borrowed from Capoeira, an Afro-Brazilian form of martial arts that’s part dance, part game, and part legit head-rocking fighting style. Capoeira’s all about narrowly avoiding enemy attacks and seamlessly transitioning into your own. And contemporary styles are especially acrobatic. The flashy fluid movements have made Capoeira fighters an exciting addition to action films and games. The Protector featured a very dramatic Capoeira infused showdown between Tony Jaa and Lateef Crowder. And Eddie Gordo has been repping Capoeira in Tekken since 1997.

But Capoeira’s not all flash. These unpredictable kicks can come from unexpected angles at frightening speed, and have given us a few brutal MMA knock outs like this one. Spiderman borrows a number of techniques from Capoeira. He moves backwards, away from danger with the Macaco Em Pe, and lashes out with a martelo de Negativa kick.

While he borrows a handful of specific techniques from Capoeira, the influence on his movement style runs deeper. Like a master Capoeira practitioner, his stance is low and mobile, and he rarely plants his feet to execute straightforward, thrusting strikes. Instead, he is constantly spinning, using centrifugal force to turn his feet and fist into high speed bludgeons.

“…Instead, he is constantly spinning, using centrifugal force to turn his feet and fist into high speed bludgeons.”

Borrowing from Capoeira, it makes sense for an agile, graceful hero like Spiderman. But it’s not the only fighting style he borrows from, and I’ll tell you about the other one if you’re ready. That’s right. We are talking about Pro wrestling. Spidey’s very first comic book appearance features and match-up in the squared circle against one Crusher Hogan renamed Bone Samudra when famously portrayed by Randy Savage in the 2002 film directed by Sam Raimi, starting Toby Maguire, Spiderman, with great power comes great responsibility.

Insomniacs Spiderman hints at his days moonlighting in the wrestling ring with this flyer in his apartment. But the wrestling moves Spiderman rocks in this game, come from a very specific discipline of wrestling, Lucha Libre. Ophidian has been performing and teaching Lucha Libre for 10 years. Lucha Libre is a variant of professional wrestling and is a very acrobatic, stylistic, high flying version of what we consider a Pro Wrestling in America, but based out of Mexico. It’s full of colorful characters and masks like you see on myself, and is a very superhero aesthetic.

Lucha Libre was popularized in the U.S. largely by WCW Luchadors like Psychosis, La Parka, and most of all, Rey Mysterio, Jr. Much like Spiderman, Ray was a slender little dude in a world of giants. He’s in ring style leveraged momentum, speed and high flying Lucha techniques to tell the story of an undersized hero using skill to overcome his stature.

Spidey busts out a handful of Lucha techniques including drop salts, head scissor take downs and perhaps the nastiest looking one, the poisoned hurricanrana. The Poison rana is a variant of a very popular Lucha Libre move known as a Hurricanrana. When sitting on your opponent’s shoulders, you have to be able to swing your body underneath of them, and land in a position where you yourself don’t get knocked out. So it would mean being able to bridge near the air to land in between your opponent’s legs, so that they can travel backwards over top of you. And how that kind of aim and precision takes years to teach.

While Spiderman is definitely strong for his size, his character’s never been about raw power. He’s quick, and he’s nimble and he’s live, which is qualities you need to do what he’s doing. I don’t think it would make sense for Spiderman given his size and weight to do anything but Lucha Libre. So drawing from Lucha Libre makes sense. It’s a style of Pro Wrestling that makes you believe or want to believe that a five six, 130 pound guy like Rey Mysterio could take down The Big Show. Spiderman doesn’t always have the strength to overcome his enemies, but he’ll always have the agility of a Lucha Libre superstar.

Hell, he’s even got the mask. He’s also got half a century of comic books to his name, which is more than enough time to have established a distinct style and persona that’s clear in his fighting style. Spidey is synonymous with dramatic, acrobatic and extremely bendy poses. The influence on Insomniac Spiderman is clear.

Spidey will rush through the motion of a move, and then linger in a trademark pose at the end. Other times, the game will actually slow down to catch him in a comic book panel come to life, showing the in addition to smartly borrowing from other fighting styles, Insomniac has a lot of reverence for Spidey’s source material.

While there’s no logical reason for Spiderman to have this mishmash of powers, the thing that they all have in common is a sense of fun, and a pleasure of movement that is quintessentially Spiderman.